The critical context of plastic pollution in Cameroun costal area

The coastal area is home to nearly 50% of the population of Cameroon; It’s composed of ecosystems that constitute a unique richness, both from an environmental and a socio-economic point of view.
Douala is the megalopolis that borders the Ocean, with its nearly 5 million inhabitants and his 600000 tons of plastic waste produced each year, of which less than 10% gets recycled. This is mainly due to the lack of a management system for this waste which flows into the sea before being “returned” to the beaches of Kribi and the main fishing area. While the rest pollutes rivers and obstructs bridges, creating floods and waterborne diseases among the population.

The accumulation of plastic debris in this marine coastal area is a pressing threat to natural habitats and biodiversity, whilst affecting and destroying fishing and tourism activities, forcing fishermen to abandon their work and youths to migrate into cities becoming homeless.
However, the companies that are involved into the recycling in Cameroon and around central Africa are in need of plastic for their activities. Additionally, several young job seekers can’t really get involved into the business of recycling because of lack of training and knowledge in this green field.

Madiba&Nature was funded to help preserve the livelihoods of fishermen whilst also addressing the issue of marine plastic pollution. We collect plastic waste and uses them to create Ecoboats for fishermen.
Plastic waste are collected through beach cleanup activities, now our strategy is to expand using of Ecobins by installing the first innovative system of waste management on the beaches and in an area of Douala.
To date the one hundred Ecobins in used in Douala, allow to collect up to 3 tons of plastic waste per Month.
This strategy allow reducing the pollution in three major areas of Kribi and Douala for around one million household in Douala, while creating 7 direct jobs and thirty indirect among the community.

Madiba & Nature has focused on a three-year vision to install environmental values in the Cameroonian population through daily useful products made out of recycle plastic waste to influence environmental policies.

Once this step was completed, this year the aim was to familiarize fishermen with Ecoboats as an alternative product.

The growth phase is abroad in order to share with the world the local innovations that work in Cameroonian communities with opportunities to replicate this system in other fisheries around the world in order to beat plastic pollution while promoting the circular economy as a guarantee of leadership in sustainable development and resilience to climate change. 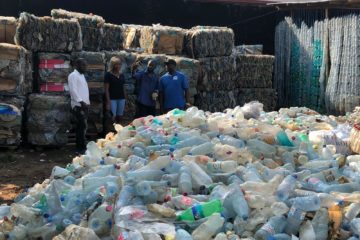 The coastal zone is composed of ecosystems that constitute a unique wealth, both from an environmental and socio-economic point of view. The enormous amount of 600,000 tons of plastic waste that goes into the environment Read more… 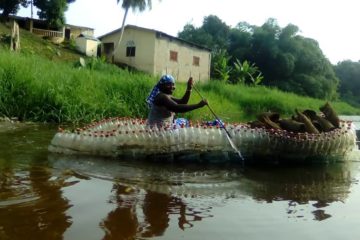 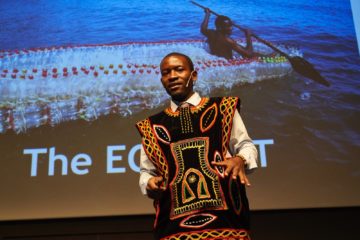 Download the power point presentation here Ismael Essome the founding president and CEO of Madiba&Nature Pitching the Ecoboat project to the Ocean Solutions Sprint semi-final at the World Economic Forum which welcomed 11 entrepreneurs, a Read more…